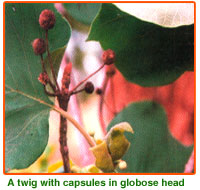 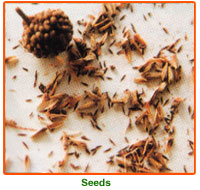 It is a species of deciduous forests, found throughout Andhra Pradesh. It usually grows on sandy loam and clayey loam soils. Identified by greyish bark, interpetiolar stipules and crodate, shortly acuminate leaves.

Morphology of the Fruit/Seed : Capsules in globose heads of 200 to 300, each splitting into 2 dehiscent cocci. Seeds about 6 in each cell, brown with numerous minute longitudinal wrinkles, one end tapering to a point and the other terminating in a pair of appendages. Seeds are extremely minute.

Seed Collection and Storage : The heads are plucked in February to March from the branches and dried in the sun to break and then immersed in the water to separate the fertile seeds which settle down. The fertitle seeds are dried in the sun and the cleaned by winnowing which can be stored in the sealed tins upto second season. Seeds germinate better after storage because they require after ripening.

Nursery Technique : A layer of brushwood is spread over the beds and burnt to produce the ash over which the seeds are broadcasted in April to May and covered with a fine layer of soil. Shading of beds is necessary. Two months old seedlings are transplanted. Weeding is avoided for some weeks after germination. Seedlings are fit for planting during the next year. ITs growth is very slow in the first year.